The Brig o’ Blair offers a fine view of the River Ericht, one of the Ecomuseum’s main rivers.

Its rapid and often turbulent water course, which descends 80 metres (262.4ft) from its headwaters at Bridge of Cally, provided the energy to power the many textile mills spinning Flax, Jute and latterly Rayon, that grew up along its banks during the 18th and 19th centuries.

This power was harnessed by building weirs on the river to divert the water into lades. These then channelled the water to water wheels which then turned, creating the power needed to run the steam powered machinery.

Before 1777 there was no bridge over the Ericht at Blairgowrie. All vehicular traffic had to cross by a ford where the croy, or weir, now is. Foot passengers were taken across the river in a small coble, or boat, with this part of the river named the “Coble Pule (Pool)” with the steep ascent on the Rattray side called the “Boat Brae”, the name retained to this  day.

In the great flood of October 1847, the water was up to within a few feet of the middle arch of the bridge and the arch on the Blairgowrie side collapsed due to falling trees and the force of the water, but it was speedily repaired.

It was first widened in 1871/72, paid for by public subscription and then widened again in 1954/55 by the then County Council, with the new, present one built inside the old one.

The construction  of  weirs was  necessary  in order  to  raise the  level  of the  water  in the  river  and to  direct  it into  the  entrances of  the  mill lades  through  sluice gates.   The  higher the  croy  the greater  the  fall between  the  entrance of  the  lade and  the  mill-wheel, and  in  consequence the  greater  the power  produced.

view of the Brig ‘o’ Blair from the south in 1927, photo courtesy of the Laing Photographic Collection

The Brig ‘o’ Blair in 1937, photo courtesy of The Laing Photographic Collection

Salmon fishermen on the Ericht in 1936, photo courtesy of the Laing Photographic collection 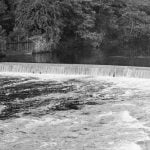