All points of interest
Have you seen:

The image shows the remains of the farm of Easter Doldy which, along with Mid Doldy, was demolished in the 1890’s. Doldy means haugh place. Only the bigger farm of Wester Doldy still exists. In 1862 Easter Doldy was considered a permanent enough structure to merit an Ordnance Survey bench-mark guaranteeing a height marked on its gable end at 848.3 feet above sea level.

The East Doldy track gave access to the steppingstones and ford over the River Isla to Redhall, Hillockhead and Auchinleish. Easter Doldy’s final resident was John Farquharson “last of the free-foresters”, the life of whom was the subject of the book “The Romance of Poaching in the Highlands” by William McCombie Smith (Relative of McCombie Mor). John Farquharson was a Glenfernate man, born in the 1830’s at Daldhu. Easter Doldy held little poaching romance for John, from this residence he was convicted of carrying a gun without license on Cammock Muir in 1884 and the following year was convicted of shooting and conveying 93 brace of grouse the day before the glorious 12th August for the London market, the story was termed “The Famous Glenisla Grouse Case”. The fine was £23 5s (£3k current equivalent). Easter Doldy was a pile of stones within 4 years.

John was untouchable in competition and invented a new stance from which to shoot from a position lying on his back. He was ridiculed and then copied in an effort to compete against him, the shooting position became known as the Farquharson position. He also invented the “Farquharson patent falling-block military breech loading rifle”. It was an improvement in breech-loading arms, for the purpose of self-cocking and throwing out the spent cartridge in one smooth motion. In the absence of a toolshed, smiddy or workshop John demonstrated the mechanism by creating the prototype in carved turnip. These Farquharson-Gibb rifles are highly sought after collectors pieces today. 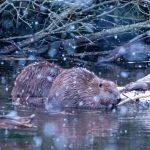 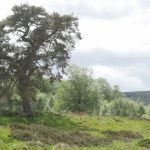