The larich of Drumnamulloch sits in the roadside field between the Alrick entrance gate and Birchwood at the Brewlands Bridge corner. It housed the blacksmiths of Brewlands well before the first bridge spanning the Isla there in 1834.

Drumnamulloch’s smiddy can still be seen on the Isla’s west bank just up from the old bridge abutment. It housed Donald McDonald smiddy in the 18th century, he was a Dundee smith’s son who took up his father’s trade and fell in love with John Robertson of Crandart’s daughter. John was a Captain, and reputedly the most handsome man in Charles Edward Stewart’s Jacobite army. John settled his new son-in-law Donald at Brewlands with Drumnamulloch as their living quarters.

Brewlands was a center of industry in Glenisla with premises for a bootmaker, carpenter, smiddy and seamstress. The last blacksmith in Brewlands was John Gow, described in 1924 as the oldest working blacksmith is Scotland at 92 years of age. All four of John’s brothers were also smiths and he took on Drumnamulloch’s smiddy from his brother Alexander in 1868, having left Deeside where he shod the horses of Queen Victoria. Glenisla’s need for a smiddy was waining by this time and the post of blacksmith was advertised for three years following Mr Gow’s passing. By the end of that decade Drumnamulloch was still vacant and the property was made available for use by the Guides and Brownies of Kirriemuir and Glamis.

A visiting Guide from 1931, under the care of the niece of Peter Pan’s very own J.M. Barrie remembers the property to be large with three rooms and an earthen floor. The Guides occupied the central room, sleeping on hessian sacks filled with straw they collected from the Home Farm of Brewlands.

These camps are documented until at least 1933 when Glenisla’s reverend Mr Wilson conducted an open-air Sunday Service at Drumnamulloch for the visiting Guides. 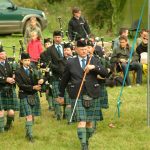