All points of interest
Have you seen:
Included in these itineraries:
History
cycling, walking, car

As you turn south, half way down the western flank of the Loch of Lintrathen, if you look at the OS maps, the remains of Durwards’ Dike are marked.

This is believed to have been a Deer Park in the 13th century. Hunting parks, often found in conjunction with high-status houses, were generally surrounded by a ditch and embankment topped with fence, known as the park pale. Peel Castle nearby, of which there are no visible remains, was the home of Sir Alan Durward who was one of the most important political figures of 13th century Scotland, effectively ruling the country at several points during the minority of King of Scots Alexander III.

Durwards’ Dike running down the Knock of Formal towards the Loch of Lintrathen, photo Clare Cooper 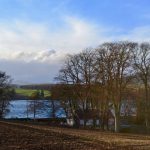 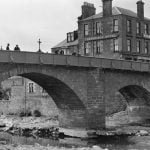