All points of interest
Have you seen:
Included in these itineraries:
History
cycling, walking

One of the oldest masonry bridges in Scotland.

Alyth’s Pack Bridge (intended to carry packhorses loaded with sidebags or panniers across the burn) is one of the oldest masonry bridges in Scotland and is shown on maps as far back as 1600.

Reputedly built around 1500, it is known to be have been rebuilt in 1674 and heightened in the 19th century with its wide parapets, although it retains its original five-foot width.

The cutwater (the sharp wedge-shaped piers of the bridge, designed to resist water flow and break up ice) is unusual and may be very ancient. The stilted segmental arch shape has also been described by historians as ‘surprising’ and the overhanging parapets ‘quite unusual’.

An ancient bridge may appear to be a permanent feature on the landscape but this is not as true as one might expect.  Every hundred years or so, because of freezing conditions in Scotland’s winters, old masonry bridges such as this one, deteriorated to the level of collapse. Floodwaters then completed the destruction.

The majority of ancient masonry bridges have been completely replaced, at some stage, by stronger structures of improved design. Even the oldest surviving bridges will often have structural features which indicate that they are not as old as their documented history suggests.  Attributing a date to an old bridge is therefore difficult.

In the Pre-Reformation period (when Scotland’s state religion was Roman Catholic) bridges such as Alyth’s Pack Bridge were commissioned by bishops and wealthy landowners as an act of charity, even piety, as well as for economic benefit; and there is a shared timescale and well as some shared technology with the building of medieval cathedrals.

As the Reformation (when Scotland became a Protestant State) progressed in the late 16thcentury, fewer bridges were built due to investment uncertainty.  However, a renewed enthusiasm came in the early 17th century when post-Reformation fervour persuaded congregations to contribute funds in order to facilitate church attendance. 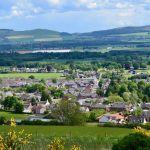 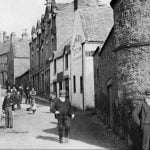