A traditional Scottish Market Town whose history stretches back 1,000 years.

Alyth is a small town, a little over half an hour’s drive northeast of Perth and northwest of Dundee. It overlooks the broad expanse of Strathmore close to Perthshire’s eastern boundary with Angus. The name is probably Pictish, containing a cognate of Gaelic meaning ‘rock, cliff’, perhaps the steep slope rising from Alyth Burn to the knoll on which the ancient kirk was built, or below the steep ridge of hills immediately to the north of the town. The name would confirm the longevity of settlement in Alyth perhaps reaching back to the sixth century or earlier.

The earliest document to name Alyth is a charter signed in AD1200 by King William the Lion. Several other Scottish kings visited Alyth, notably Robert the Bruce, and probably hunted in the royal forest here. In 1488 it was created a Burgh of Barony by King James III with the right to hold fairs and markets which enabled the town to grow.

The economy of Alyth really picked up in the 1700s with large-scale agricultural improvement and cattle droving to the south, and the development of linen production in the town. In the following century Alyth greatly expanded, particularly with the arrival of the railway in 1861. Steam-powered textile mills were established and there was a growth in retailing, while new hotels catered for holidaymakers, golfers and country sports enthusiasts.

Today, industry has largely gone, but Alyth retains many shops and businesses as part of a varied and vibrant community. It has the only museum in Perthshire outside of Perth, a flourishing community of artists and a growing tourism economy, which is building on the many natural and cultural heritage sites and places of interest in and around the town, many of which are part of this Alyth Auld Town itinerary.

The ancient settlement of Alyth lies at the junction of Glenisla and the Grampian foothills and the rich agricultural lands of Strathmore. It gradually developed into a town serving the needs of the local area, located at a confluence of drovers’ roads used by hill farmers to bring their cattle and sheep to market.

The area is studded with prehistoric sites, notably the Iron Age fort on Barry Hill and Pictish remains dating back to the 9th century AD. With the coming of Christianity a church was established in Alyth, ascribed to the Irish missionary St Moluag, known as the Apostle of the Picts, sometime between AD562 and 592.

The ruins of the later church buildings, and the distinctive arches, remain a feature of medieval Alyth on the hill overlooking Alyth Burn and the modern lower town. The church was dedicated to Moluag and the main annual market was held on his name day (25thJune) every year in the vicinity of the church and nearby Woolmarket.

In late medieval times Scottish kings used the nearby Forest of Alyth for hunting during their progress around the country. They probably occupied the royal castle of Inverqueich just east of the town (where Edward I of England stayed during his campaign against the Scots in 1296) or the castle of Corb, a hunting-seat in Glenshee in the north-west of the Forest. Various charters were signed at Alyth by William the Lion (from 1200), his son Alexander II and Robert the Bruce. Nessus de Ramsay was physician to King Alexander II and in 1232 was awarded lands around Bamff near Alyth, where the family still live.

In 1488 Alyth was created a Burgh of Barony by King James III which bestowed greater commercial advantages. Eventually, the lands around Alyth passed from the Lindsay Earls of Crawford into the hands of the local Ogilvy family, and the first earl acquired the feudal superiority of the burgh in 1624. Baron Ogilvy of Alyth and Lintrathen remains a subsidiary title of the Earls of Airlie.

Difficult economic conditions in the late 1500's saw a decline in the sale of wool and woollen cloth, but the union of the Scottish and English crowns in 1603 under James VI eventually led to more peaceful conditions and the gradual development of large-scale cattle droving which came to benefit Scottish producers and markets including Alyth.

During the years of civil and religious conflict in the mid-17thcentury, the most dramatic event in the history of the town occurred known as the ‘Onfall of Alyth’ (28th August 1651). The town was chosen as the rendezvous for the Committee of Estates, effectively the Scottish government, to organise resistance to the English Parliamentary invasion forces under General Monck, then besieging Dundee. The Committee was betrayed and surprised by a strong force of cavalry, and in the fighting that ensued the Earl of Leven (commander of the Scottish forces), the Earl of Crawford, the Earl Marischal and other prominent persons, including the Minister of Alyth, Rev. John Rattray, were captured and sent to the Tower of London. This event temporarily extinguished the Scottish Government of the time.

The Scottish economy was further depressed in the late 1600s and following the Act of Union in 1707, which gave succour to the supporters of the deposed King James VII and the various local families, notably the Ogilvys, involved in the Jacobite rebellions.

Slowly, the economy recovered and landowners invested in agricultural improvement, including draining boggy ground and enclosing common land. As Thomas Pennant remarked on passing through the area in 1772, ‘improvements in agriculture, and in making good roads, go on most prosperously’. Many small farmers and agricultural labourers, however, were forced off the land and ended up in the towns. Alyth’s population increased from 555 in 1774 to 1060 in 1792.

The period of war with France was generally prosperous and the manufacture of yarn and coarse brown linens (from locally-grown flax) brought good prices, which fell sharply again when peace arrived in 1815. A link with this period remains in the form of a church bell from Brittany. It was captured in 1810 from a French frigate taken by HMS Horatio and was sent as a gift to Alyth by John Warden, a son of the owner of the Bamff Arms, who served on the ship. It remains on display in the town hall.

After the post-war depression Alyth’s retail, spinning and weaving trades prospered once more, aided by the opening of the Dundee to Newtyle Railway in 1831. By 1841 the town’s population had risen to 1,846. A new handsome parish kirk was completed in 1839, and the lower part of Alyth was developed along the line of Airlie Street, with new houses, shops and Episcopal Church (1856) reaching as far as the modern war memorial on Market Muir by 1861 when a railway was put through to the main Strathmore line at Alyth Junction.

In the early 1880s the Ordnance Gazetteer of Scotland reported: ‘the manufacture of brown and other linens is the staple industry, employing two mills, one of which, Smith & Sons (1873), to flax adds jute spinning ... and there is also a woollen factory’. Smith’s mill alone employed 350 people from a population that reached 2,377 in 1881, and led to the demise of hand-loom weaving in the town. Livestock fairs on Market Muir also came to an end, which now took place at the auction mart, near the railway station, convenient for the transport of animals.

In 1875 Alyth was designated a police burgh and its administration and infrastructure were modernised. An impressive new High School was built in 1885 followed by a grand town hall in 1887. At the time of Queen Victoria’s Diamond Jubilee in 1897 the Earl of Airlie presented a public park to the people of Alyth. Many pageants (for example at the time of the Coronation of King George VI) and town galas have been held in this park. The local beauty spot, the Den o’ Alyth, was gifted to the town in 1923.

Many other improvements accompanied the prosperous Victorian and Edwardian years. Increased leisure time and better transport links encouraged pursuits such as golf (Alyth Golf Club founded 1892) and curling as well as hunting, shooting and fishing, attracting holidaymakers to Alyth’s new hotels. The growth of car ownership helped but ultimately the competition of road transport undermined the railway that had done so much to boost trade, agriculture and tourism. Passenger trains ceased to run in 1951 and the line closed in 1965.

Today, following the progressive deindustrialisation of the town, Alyth’s economy relies largely on tourism, retail and the service sectors. The last significant manufacturer, the Forfar Carpet Company in the former jute mill, closed in the 1990s. Vehicle servicing and restoration have become important activities, but some traditional agricultural and forestry work remains.  In 2007 the Forestry Commission bought land on Alyth Hill for planting and developed the Alyth Community Woodland as an extra leisure attraction. The High School closed in 1994 but the remaining Junior School was refurbished and enlarged in 2018. The population of the town has remained broadly stable, numbering 2403 in 2011. 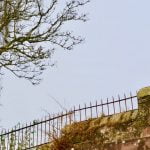 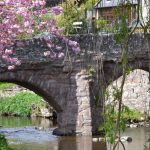