All points of interest
Have you seen:
Included in these itineraries:
History
cycling, car

One of the largest Megaliths in the area.

After leaving Drimmie Woods heading south towards Blairgowrie and Rattray, in a field on the left of the road, is the massive Kynballoch Stone.

Aligned NNE-SSW, it is known in archaeological circles as ‘the Craighall Stone’ or ‘Glenballoch Stone’. Made of Dalradian Schist, it is 2.5m high and 6m in circumference on the base. Close to the base on the east face of the stone are nine cup marks.

Why cup marks were carved into these pre-historic stones have puzzled both researchers and layman alike for more than a century More than one hundred theories regarding the reason behind them have been proposed including a belief in magic, in the afterlife, use as a tuning device and a plan for Megalithic structures.

Further downhill you can see the remains of a stone circle. The stones are all rough boulders and some may have been slightly displaced. This type of stone circle is likely to be Bronze Age and would have formed a focus for ritual activity over a long period. 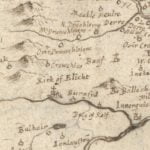 The Royal Forest of Alyth 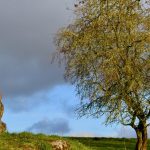