All points of interest
Have you seen:
Included in these itineraries:
History, Memorial
walking, cycling

The birthplace of the famous covenanter and defender of Presbyterianism.

Donald Cargill, born in Rattray, was a Presbyterian minister and Covenanter. The Covenanters pledged to maintain their own way of worship following the signing of the National Covenant
in 1638, hence their name.

However, during the latter half of Charles II’s reign, Presbyterianism was outlawed by the Scottish Parliament. Ministers who resisted were evicted from the Church. Cargill, like many other ministers, was forced to hold illegal meetings called ‘conventicles’. These meeting were often broken up by the military and those captured were cruelly treated.

On one occasion Cargill managed to escape the troops by leaping a very narrow part of the River Ericht just above Blairgowrie, still called Cargill’s Leap.

He was eventually captured in 1681 and taken to Edinburgh where he was found guilty of treason and executed.

Donald Cargill was born on this site, Hatton of Rattray, about 1610. He trained for the ministry and was appointed to the Barony Church in Glasgow in 1655 where he stayed for the next seven years. But with the restoration of Charles 2nd, Cargill was expelled for his extreme Presbyterian views.

It was said that he was a timid man though this does not appear in either his actions or his utterances. Together with Richard Cameron, he led the more extreme faction of the Covenanters, known as the Cameronians, who were unwilling to countenance any compromises with Episcopalianism. The comment by James Ure of Shargarton, himself a moderate but very well respected Covenanter, is instructive. “I told Mr Cargill,” he said “that he rendered himself odious by his naughty principles. He was very much offended with me.”

After the death of Richard Cameron, Donald Cargill became the undisputed leader of the Cameronians. Two months later on September 15th, at a great conventicle (a secret or unlawful religious meeting) at Torrwood, between Larbert and Stirling, Donald Cargill “at his own hand, Pope-lyk did excommunicate the King (Charles 2nd), Duke of Monmouth, Duke of York (Charles’ brother, later James 7th), the Chancellor Rothes, the King’s advocate, General Dalziell and the Lord Rosse.”

It was a comprehensive declaration of war against the Establishment and indeed the Monarchy itself. By this time Cargill was an old man and in July of the following year he was captured near Lanark and “carried before the Council and interrogit. Whether he had excommunicat the King answered that that being a church affair, the church not they were competent to judge.” Inevitably he was sentenced to death.

There were conflicting accounts of his last words. According to Robert Law, a moderate Covenanter “Mr Donald’s last words going up the ladder were these ‘The world is weary of me and I am weary of the world’.”

These seem singularly sad and pessimistic. A more robust version, more in keeping with what we know of the man has him saying. “God knows, I go up this ladder with less fear, confusion, or perturbation of mind, than ever I entered a pulpit to preach.”

As was the custom they fixed his head on the Netherbow in Edinburgh. It was July 27th 1681.

Cargill’s Leap on the River Ericht, photo courtesy of the Laing Photographic Collection

Extract from a book of Donald Cargill’s sermons, photo National Library of Scotland 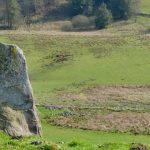 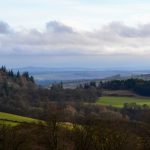