Memorial to a prominent local man.

James Small was an important 19th century Scottish Laird from Kirkmichael. As well as the local estate of Dirnanean, Mr Small owned as much as 20,000 acres of land in the surrounding area and played a prominent role in village life. Following his death on June 29, 1900 at the age of 65, an obituary in the Blairgowrie Advertiser read: “To a thorough practical knowledge of country life in all its aspects, he brought a soundness of judgement, a kindness of heart and a readiness to help, which made him a friend, and often the adviser, to all who knew him”. Standing an imposing 18 foot high at the junction of the A924 and B950 on the outskirts of Kirkmichael, this Aberdeenshire granite structure commemorates his life.

James Small born on 28 May 1835 in Perthshire, was the son of Patrick Small and Amelia Rattray of Kirkhillock and Brewlands. Patrick Small died in 1859 and Dirnanean passed to James, the ninth time the estate passed from father to son since the 1588 charter by John, the 5thStewart Earl of Atholl had granted the lands of Dirnanean to the small family.

The couple had no children to inherit Dirnanean, so James’s nephew  James Small Pender was designated his heir.

James served as the Justice of the Peace and Deputy Lieutenant for County Perth.  He was also head of the Kirkmichael school board, Chieftain of Strathardle Gathering, President of the local horticultural society and many other committees.  He was also a member of the Atholl Highlanders, this is now the last private army in Europe.

James was buried in the family grave in Kirkmichael Churchyard.

In honour of his service to the Perthshire area, the community erected the James Small (1835-1900) of Dirnanean Monument at the junction of the A924/B950.  The monument is a highly ornate Celtic Cross.  In December 2006, the memorial was toppled over by an errant motorist and fractured into a dozen pieces.  In 2010 the memorial was repaired by the Perth and Kinross council at a cost of £35,000.  As part of the repairs, the memorial was relocated to the side of the road to provide additional protection. 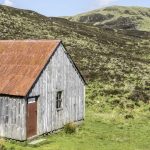 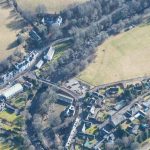