A classic example of a Forest grown for timber.

Glenisla is a highly productive forest and has a proven record of growing quality timber. Planting began here in the 1949 with Sitka Spruce being the main species grown because it grows quickly and provides a premium softwood timber product in as little as 25 years.

First introduced into Scotland by plant hunter David Douglas in 1831, the trees originate from the ‘fog-belt’ of western North America. The First Peoples of the Pacific Northwest however, made very little use of the timber, valuing its roots more highly. These were split lengthwise into four to eight strands for making twined basketry and finely woven waterproof hats. The resin of the bark was preferred to the pitch of pines as an all purpose adhesive, to caulk holes in cedar boats, cure carbuncles, or simply as chewing gum.

Unfortunately, the strategy of ‘blanket forestry’ of primarily one species, like Sitka Spruce, together with the practice of ‘clear felling’, reduces biodiversity because it fails to support the natural fauna and flora that a mixed pine forest would. It can also leave a forest susceptible to catastrophic diseases and pest damage.

Whilst there are plans to establish riparian native woodland up the main watercourses, the success of this will be dependent on the management of Deer numbers.

The neighbouring hill populations of deer remain very high and especially in winters with heavy snowfall large numbers of deer can cross the deer fences and take shelter in the plantation. These deer decimate the young trees when they are all that is showing above the snow.

There are three main burns in the forest. In the east of the forest the Glen Taitney burn flows into the Glendamff burn and then on to the Backwater reservoir, which supplies water to towns in Angus as well as Coupar Angus and Blairgowrie. Backwater provides additional supplies to Dundee should the demand on nearby Lintrathen Reservoir become too great. The Glen Taitney burn also provides the water supply for the local community at Glen Markie. Running parallel to west is the Glen Taitney burn is the Finlet burn, which flows into the Newton burn and then the River Isla. On the western forest edge is the Muckle burn, which mostly marches with the forest, only  running through the forest for about a kilometre. 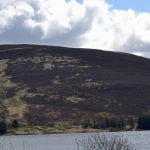 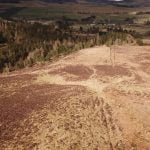