All points of interest
Have you seen:
Included in these itineraries:
Historic Building
walking

During 1947 – 49,  the Mill  was partly  rebuilt and  additions  made by  Thomas Thomson (Blairgowrie) Ltd., converting  it  into a  power  station for  Bramblebank  Works, the  next  mill downstream.    A  twin turbine  capable  of producing  from  250  to  300 horse-power  was  installed along  with  a diesel  engine  producing 420  horse-power.   The old  water  wheel  was  repaired and,  with  its production  of  160 horse-power,  Bramblebank  was well  supplied  with  motive  power.  All  three  were connected  to  the same  driving  shaft and  could  work together  or  independently.   A dynamo  converted  their power  into  electricity which  was carried  by cable  to  Bramblebank.

In 1963 the Westfield Dam was swept away and, when neighbouring Bramblebank closed the same year, there was no longer a need for the power from Westfield.

The buildings have remained in the same sorry state as after the 1934 fire although now almost completely smothered by trees, ivy and brambles. However the tall, octagonal based chimney stack is still standing and in good condition.

The mill was built in the area of Westfields of Rattray and is now surrounded by fruit growing at Westfields farm.

Westfield Works after the fire in July 1934 , photo courtesy of the Laing Photographic Collection 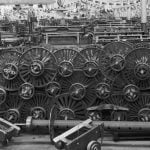 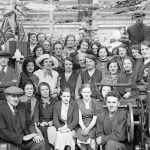