The smallest of all the mills.

This mill stands about 300 yards up the Lornty Burn, a tributary of the River Ericht on the Blairgowrie side of the river. It seems to have been in size and production the smallest of all the mills which existed in Blairgowrie and Rattray in the 19th century. In 1840 the number of hands employed there totalled only 29, of whom 21 were women.

The mill was built in 1814 by Mr. David Grimond, one of the founders of the linen trade in Blairgowrie and originally a millwright, on the site formerly occupied by a lint mill and then a snuff mill.

The military road from Coupar Angus crossed the Kirriemuir to Dunkeld Road in Blairgowrie and proceeded out to Lornty where, after crossing Lornty Bridge, it carried on through the hills to Bridge of Cally and beyond. Thus with ready access for receipt and despatch of goods and ample water to drive the machinery it was an ideal site for a water mill. One of the lintels bears the date 1755 which may reflect the date of an original lint-mill.

In addition to the mill there was a ‘fermtoun’, Lornty Farm, and it appears to have been the practice to regard the farm and the mill as separate entities for rental purposes. The steep rise of the hills behind Lornty with their unseen tributaries of the Lornty Burn provided a powerful flow of water.

Historians presume this early  mill  used  this water  power  to drive  whatever  machinery was  required  for manufacturing.  In earlier days it was used as a snuff mill by George Barty (snuff and tobacco merchant whose mother was Alison Soutar). He eventually left Lornty to set up a successful tobacco business in 55, High Street, Perth.

“Mr George Barty, a tobacconist in Perth and a native of this parish, by his settlement bequeathed one-third of the free residue of his estate to the Dean of Guild and Guild Council of Perth, in trust, for the purpose of laying it out on heritable security and paying the interest thereof annually to the Parish Schoolmaster of Blairgowrie and his successors in office, to defray the expenses of educating all the orphans, fatherless, and poor children belonging to the parishes of Blairgowrie, Rattray, Bendochy, and Kinloch, in the Parish School of Blairgowrie, the children to be recommended by the ministers and Kirk-Sessions of these parishes, and those bearing the name of Barty or Soutar to be preferred". Mr Barty died in June, 1838, and his bequest came into operation at Martinmas, 1841. The fund mortified amounted to £1400, and there were at one time upwards of 50 children enjoying the benefit of the bequest.

They were taught the same branches and enjoyed equal advantages in all respects with the other children attending the schools.

When free education was instituted throughout the country, the trustees of this Barty Mortification resolved to found yearly bursaries of £4 and upwards (being the free interest of the capital as far as it would admit annually), for competition among scholars attending school in this and the other neighbouring parishes aforementioned, to "encourage them in the pursuit of knowledge and education.”

A Blairgowrie merchant of many years standing, Charles Grimmond (possibly related to Barty through marriage – his wife was Ann Soutar), had an interest in this mill in 1802/3. He received a grant from the Board of Trustees towards the cost of repairing the lint mill and erecting a shed in 1803.

David  Grimond (possibly a nephew of Charles)  saw  that sufficient  power  could be  obtained  from the  fall  to drive  flax-spinning  machinery, and in 1814,  having arranged  for  the site  with  Colonel Allan Macpherson,  the  then proprietor,  he  built a  mill  of modest  dimensions  in which  he  had 4  spinning  frames, the  clear  profit on  which  was about  £5  or £6  per  week.

It was  subsequently  enlarged and, though  in  appearance and  output  it was  far  behind the  other  mills which  had  sprung up  in  the neighbourhood,  a  considerable amount  of  business was  done  in it  until  as late  as  1899.

The  lade  for this  mill  is extremely  small  compared with  others  in the  district,  being only  4  feet in  width.   This gives  some  indication of  the  small amount  of  power required  for  the driving of  4  frames.  The  exit  of the  lade  is very  interesting  being through  an  opening, with  wooden  grating, low  down  in the  steep  bank of  the  Lornty Burn,  thus  enabling the  water  to escape  more  rapidly  than it  normally  would by  way  of an  ordinary  open lade.   This  type of  exit  may have  been  constructed in  1901  when the  mill  was fitted  out  with a  water turbine  (by J Turnbull Jun & Sons) and  new spinning  machinery  was installed.   But with  the  death of  A. D. Grimond (grandson of David Grimmond) in  1904,  the mill  could  no longer  survive  on its  antiquity in spite of the recent upgrading and  was  closed.

The building is in a very poor state and the peind roof has collapsed.

You can find out more about the place name ‘Lornty’ here. 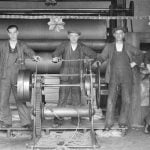 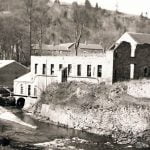