One of the largest examples of an 8th or 9thc Pictish Symbol bearing Cross Slab.

The small village of Kettins lies just across from the southern edge of the Ecomuseum. This cross-slab stands beside the northern boundary wall of Kettins church-yard, facing the north side of the parish church.

The slab is Old Red Sandstone, possibly quaried in Kettins parish, certainly in Strathmore. The 2.8m high stone is a tapering rectangular slab fixed into a 19thc base and supported by 19thc/20thc iron fittings. Decoration survives only on the front face.

Whilst the imagery is very hard to see now, an explanation of them can be found in the image below, taken from  this leaflet, further text from which we have also transcribed in the ‘read more’ link. 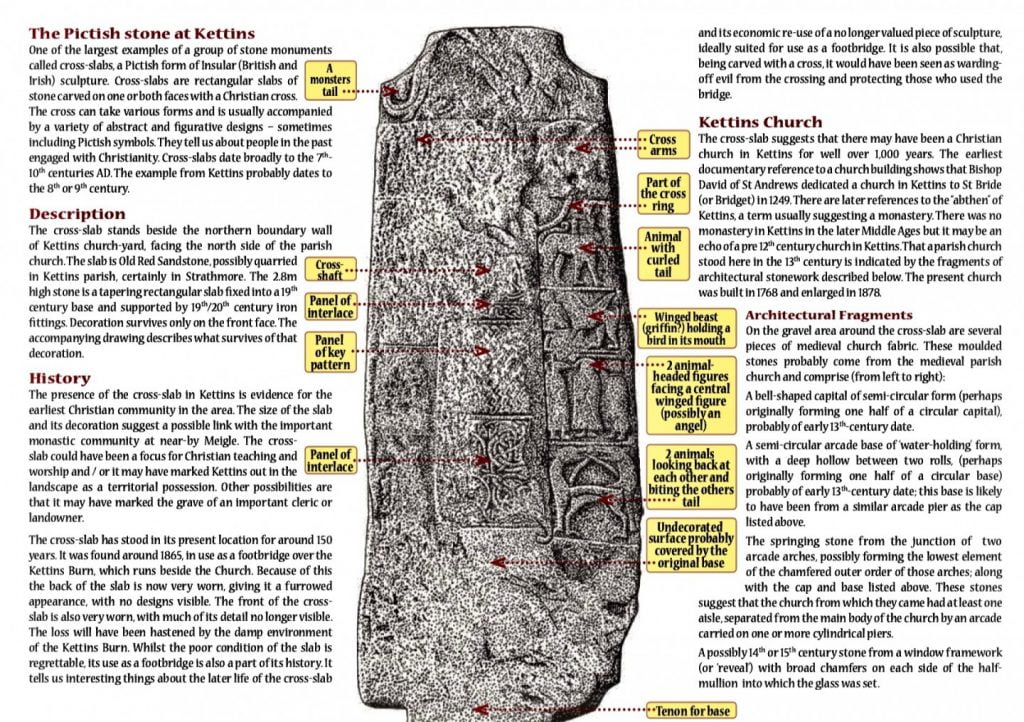 The cross-slab has stood in its present location for around 150 years. It was found around 1865, in use as a footbridge over the Kettins Burn, which runs beside the Church. Because of this the back of the slab is now very worn, giving it a furrowed appearance, with no designs visible. The front of the cross- slab is also very worn, with much of its detail no longer visible. The loss will have been hastened by the damp environment of the Kettins Burn.

Whilst the poor condition of the slab is regrettable, its use as a footbridge is also a part of its history. It tells us interesting things about the later life of the cross-slab and its economic re-use of a no longer valued piece of sculpture, ideally suited for use as a footbridge. It is also possible that, being carved with a cross, it would have been seen as warding- off evil from the crossing and protecting those who used the bridge.

The presence of the cross-slab in Kettins is evidence for the earliest Christian community in the area. The size of the slab and its decoration suggest a possible link with the important monastic community at near-by Meigle. The cross-slab could have been a focus for Christian teaching and worship and / or it may have marked Kettins out in the landscape as a territorial possession. Other possibilities are that it may have marked the grave of an important cleric or landowner.

The cross-slab suggests that there may have been a Christian church in Kettins for well over 1,000 years. The earliest documentary reference to a church building shows that Bishop David of St Andrews dedicated a church in Kettins to St Bride (or Bridget) in 1249. There are later references to the “abthen” of Kettins, a term usually suggesting a monastery.

There was no monastery in Kettins in the later Middle Ages but it may be an echo of a pre 12thc church in Kettins. That a parish church stood here in the 13thc is indicated by the fragments of architectural stonework described below. The present church was built in 1768 and enlarged in 1878.

On the gravel area around the cross-slab are several pieces of medieval church fabric. These moulded stones probably come from the medieval parish church and comprise (from left to right):

A bell-shaped capital of semi-circular form (perhaps originally forming one half of a circular capital), probably of early 13th-century date.

A semi-circular arcade base of ‘water-holding’ form, with a deep hollow between two rolls, (perhaps originally forming one half of a circular base) probably of early 13th-century date; this base is likely to have been from a similar arcade pier as the cap listed above.

The springing stone from the junction of two arcade arches, possibly forming the lowest element of the chamfered outer order of those arches; along with the cap and base listed above

These stones suggest that the church from which they came had at least one aisle, separated from the main body of the church by an arcade carried on one or more cylindrical piers.

A possibly 14th or 15th century stone from a window framework (or ‘reveal’) with broad chamfers on each side of the half- mullion into which the glass was set. 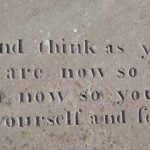 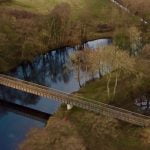