Formerly listed as 'Keithbank Mill, Westfields of Rattray'. The earlier water-powered mill was converted and extended for Matthew Low, spinner, to run off a single cylinder horizontal steam engine. Keithbank is of special interest as a combined steam- and water-powered mill containing the original power plant.

The mill  ran  continually right  up  to 1928  when  it closed  until  1932.  At the latter date it was acquired by Mr.  Thomas Thomson  who  re-started it  despite  the depression  of  the time  and  despite the  fact  that spinning  mills  all over  the  country were  closing  down.  Along  with  Ashgrove Mill,  Messrs. Thomas  Thomson (Blairgowrie) Ltd  succeeded in  operating  Keithbank successfully  in  competition with  Dundee  although all  jute  fibre was  brought  to Dundee  by  boat and  extra  haulage to Blairgowrie  was involved.

This extract from an address  to  Blairgowrie Rotary  Club  given by their  president,  ex-Provost Thomas  Thomson,  head of  Thomas  Thomson (Blairgowrie) Ltd., September,  1947 offers some interesting background to this textile.

At  Keithbank  the staple  fibre,  or fibro  as  it  was  called by  the  producer, Courtaulds,  is  spun.  From  the  spinners’ point  of  view it  is  attractive because  the  fibres are  of  uniform length  and  thickness.  It is clean, strong  and easily  dyed  to any  desired  shade.  At  the  present time  rayon  is produced  in  various ways  but  well over  80%  of the  world’s  total production  is  obtained by  what  is known  as  “viscose manufacture”.   The  source of  cellulose  used for  viscose  is wood  pulp,  the spruce  being  largely used.   The pulp  is received  in  the factory  in  the form  of  stiff boards  about   twenty inches  square  by one-eighth  of  an inch  thick.   These are  steeped  in  caustic  soda, shredded  into  “crumbs”, carbon  bi-sulphide  is added,  and  after a  lengthy  process of  ageing,  mixing and  ripening  the spinning  stage  is reached.   This  is done  by  forcing the  solution  through very  small  holes, the  size  of which  determines  the thickness  of  the thread  produced”.

Keithbank Mill finally closed in 1979. A substantial building, it was perfect for adapting to other uses. From 1990 until 2002 it housed a very popular Heritage Centre. In 2007 the property was converted into spacious apartments. Some original features were retained although the tall stack (chimney) of the power station was reduced in height.

Keithbank (sometimes spelt Keathbank) is named after the Keith Falls where the river Ericht pours down a narrow gorge now known as Cargill’s Leap.

‘That narrow portion of the River Ericht running through a chasm or opening betwixt some flat conglomerate rocks’.

A kind of bar, called a Keith laid across the river at Blairgowrie, by those who are concerned in the salmon fishery there, effectually prevents the salmon from coming up the rivers Ardle & Shee.

You can find out more about the place name 'Keith' here. 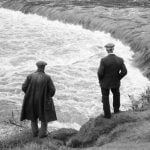 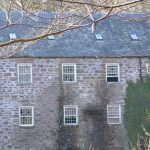