All points of interest
Have you seen:
Included in these itineraries:
Archaeology, Historic Building, History
walking, cycling, car

Site of one of Scotland’s most successful Cistercian Monasteries.

Coupar Angus Abbey was a Cistercian Monastery founded in 1159 on the old Royal Manor of Coupar.

King Malcolm IV (1156-65) allocated the land to the order on the advice of his uncle, Waltheof, who was abbot of the Cistercian Abbey at Melrose.

The Abbey was built in 1233 and would have consisted of the normal conventional buildings : church, cloister, residence for the abbot, sleeping accommodation for the monks, refectory, guesthouse and sundry offices.

It seems likely that the Abbey complex at Coupar Angus also included a range of further buildings, such as stables, brew-houses, bake-houses and metal-working premises.

By the time of the Reformation, Coupar Angus was said to be the wealthiest Cistercian Abbey in Scotland.

The Cistercian monks led an austere and simple lifestyle and they were famous for their ability to reclaim and improve land, a legacy that provides the basis for the fertile agricultural land of Strathmore to this day.

They had a strong affinity with their surroundings, the physical environment being seen as "a window onto the Divine" and the taming of the landscape symbolic of the soul’s return to God. They cultivated the image of themselves as ‘desert monks’ and their regulations stated that their abbeys should be located in remote and wild places. Their custom of wearing undyed habits led them to become known as the “White Monks’.

Under their industrious occupation both the Abbey and surrounding countryside became rich. Gifts of further land were made to the monks and by the early 14th century the Abbey owned 8,000 acres including lands further north in Glenisla and Strathardle.

Originating in eastern France, by 1250, there were 650 Cistercian Abbeys and 900 nunneries in existence across Europe, which means that Coupar Angus would have been a conduit for the exchange of European culture and ideas of that time.

The Abbey buildings were partially destroyed in 1559 during the Reformation and the Abbey was dissolved in 1607 during the reign of the Protestant King James VI and I.

Today there is little remaining on site other than a small wall fragment and gateway arch on the southern edge of the town adjoining the A923 road to Dundee, the stone having been used by local folk in the construction of many other buildings in the town including the present church immediately to the north of the former Abbey site. The characteristic red sandstone used in the buildings was quarried locally from the extensive Devonian Old Red Sandstone.

In the 19thc, women found the Ley Tunnel of Coupar Angus Abbey near the entrance to the churchyard. One went in and was never seen again, however in 1982 a local mason found the entrance again and went in some distance before finding a cave-in. It is said that the tunnel ran a further two and a half miles to the souterrain at Pitcur.

Both the Abbey gatehouse and the Abbey precincts are separately designated as scheduled monuments. 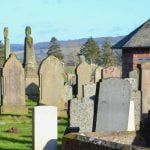 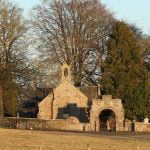