All points of interest
Have you seen:
Included in these itineraries:
Historic Building, History, Memorial
walking, cycling, car

One of the Ecomuseum’s most historic churchyards.

The Coupar Angus Abbey Kirkyard sits on a slight prominence in an otherwise low-lying area South of the River Isla and within a loop of its tributary, the Coupar Burn.

The Gatehouse
The Gatehouse is the only remaining part of the Abbey and is a Scheduled Monument. It sits in a separate rectangular area and is owned by Moray Estates. The condition of the arch has been surveyed and it has been found un-safe and in need of urgent repairs which are currently under consideration by Historic Scotland. The drawing from the 18th century suggests that this was the only remaining part of the Abbey still standing. The old plan of the Abbey shows that there were fortified towers at each corner of the walled Abbey Precinct. However, Pont’s Map and Lord Balmerino’s painting indicate a tower.

The Watch House
The roughly octagonal building was erected by public subscription in 1822. However, it re-uses medieval fragments of masonry. In particular the frieze at the top of the wall appears to be sections of the Abbey’s massive fluted columns. Inside, there is a fireplace to warm the men who kept watch through the night for body snatchers, who posed a threat particularly in the first three decades of the 19th century.

The Murray of Simprim Mausoleum
This was built in 1850 as the family burial tomb for William Murray of Simprim, a wealthy landowner. Although built as a mausoleum, the building is anecdotally described as a Mortuary and the interior is fitted out with a sink and a natural stone anatomy slab.

Gravestones
The Key to the Gravestones (below) can be found in Perth & Kinross Heritage Trust’s leaflet on the Kirkyard which you can view in full here. 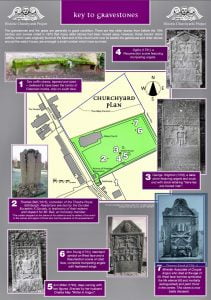 The name Coupar is possibly derived from the Gaelic Cul-Bharr, or rear-of-the-ridge, which describes the situation of the town. The local area has a rich layering of history with cup-marked stones, a Bronze Age cairn site, stone circles, Iron Age forts, and Pictish stones and burials. On the churchyard site itself however, there is no evidence prior to the medieval Abbey.

Although the Cistercian Order which founded the Abbey had a tradition of occupying unbroken ground, an 18th century plan of the Abbey shows “Agricola’s walls”, suggesting a connection with, or even re-use of Roman fabric. The Roman camp lay in approximately the same position as the Abbey and it is possible that it occupied the same site. A “Celtic head”, with curly hair and elliptical eyes with pupils, was found in a garden in Abbey Road. It is now in storage at the Perth Museum and Art Gallery.

Coupar Angus Abbey was established in 1164 by Malcolm the IV and, by the 14th century, had become what was probably the wealthiest religious house in Scotland. The Abbot and monks have left their mark on the map of the area. The town grew up around the site of the market outside the gates, to the north of the Abbey. The Cistercian Abbey was one of three large foundations in Perthshire, the other two being Innerchaffray (an Augustinian Abbey) and Elcho (a Cistercian Nunnery). After the Reformation in 1560 (when the church split from Rome and became Protestant), the Abbey and its surrounding buildings fell into disrepair and its carved masonry can be identified, re-used in buildings around the town and the wider area, such as Arthurstone.

Shortly before the Reformation the Abbey gradually fell into decline. The condition of the Abbey and is buildings deteriorated rapidly (there are uncorroborated accounts of destruction by a mob from Perth) and it became derelict.

The Abbey was stripped of its finery, ornament and the “idolatory” which so offended the Reformers. A lasting achievement of the Abbey was its highly organised agricultural development and improvement of the land by drainage. A new church was constructed from the Abbey’s stones in 1647, which was later modified in 1780. This second church was replaced by the present church in 1859 designed by local architect John Carver and is a Category B Listed Building. 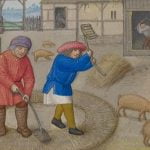 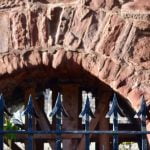