The leading entrance to the Highland Glens.

Bridge of Cally is small village just north of Blairgowrie through which the Cateran Trail runs.

The village sits at the junction of the glens Glenshee and Strathardle where they combine to form a third, Glenericht, and is centred round the bridge over the River Ardle.

The A93 ‘Snow Roads Scenic Route’ from Blairgowrie into the Cairngorm Mountains follows the line of the 18th century military road, crossing the River Ardle where the new road forms a junction with the A924 road to Kirkmichael and Pitlochry.

The village is popular in winter as it is near the Glenshee Ski Centre and has  a hotel, a post office/general store, an angling book shop, a village hall and a large holiday park.

The Bridge of Cally Hotel, formerly known as the Invercauld Arms, was for a long time a temperance establishment with alcohol being served for the first time in the 1960s.

The Placename 'Cally' refers to an area of land near the junction of the River Ardle and Black Water and includes Bridge of Cally, Cally House, West Cally, Cally Mill, and Hill of Cally. It may also include Rochallie (perhaps containing Pictish *roth meaning ‘fort of Cally’) across the River Ericht from Bridge of Cally.

The name Cally is almost certainly Old Gaelic and may even be Pictish, the earliest spellings (Kalathyn 1214 × 1238; Calady 1326) suggest OG calathin ‘hard place’ or ‘at a hard place’. Quite what was ‘hard’ about Cally is not clear; the word is found in places all over Scotland containing names like Calder, Cawdor, Keltie, and possibly Callander. However, these names all relate in some way to rivers in that they are named after a river or they are near rivers which have some kind of ‘hard’ attribute. It may be that Cally takes its name from some perceived hardness in the River Ardle, or, alternatively, the name relates to the hardness of the ground; perhaps it was thought rocky or difficult to farm when it was named. 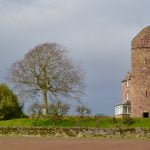 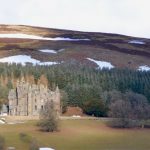