Built by Public Subscription in 1836.

Brewlands Bridge (or Claypots Bridge) was built by public subscription in 1836. The subscriptions give a fascinating insight into the relative considered worth of the land and occupants in Glenisla at that time.

The bridge replaced treacherous stepping stones 50 yards downstream and was itself replaced by a concrete bridge upstream in 1970.

In 1834 a bridge committee made up of John Smyth, Balharry; James Rattray, Kirkhillock; Thomas Rattray, Bellaty concluded that construction of this bridge should proceed at a cost of £280. The money was collected by subscription from over 50 named individuals in properties benefitting from its construction in upper Glenisla.

The illustration viewpoint by Kevin Greig of #staneswinames, is on the site of James Robertson’s house, constructed on the west abutment, level and flush with the carriageway.

In 1876 James went missing in the hills between Brewlands and Dalrulzion after a footwear delivery. In a rare united action, both the Established and Free Churches of Glenisla organised a combined search party which eventually found James’s body having lost his own shoes and worn through his socks in his attempt to reach home in dreadful weather. 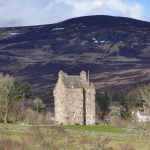 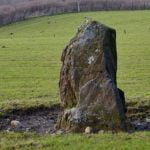