All points of interest
Have you seen:
Included in these itineraries:
Nature Trail
walking

A pioneering example of ecology restoration.

Bamff is a 1,300 acre estate carved out of the old Royal Forest of Alyth.

In 1232, King Alexander II gave it to Neish Ramsay, his doctor, and his descendants have held it ever since.

The present house began as a peel tower in the late 16th century.

Priorities have differed over the centuries through enclosure, designed landscape and drainage, to romanticism, shooting, exotic specimen trees and agricultural improvements.

The current generation, since the 1980s, has focussed on environmental conservation with native woodlands, a beaver demonstration project, and recently ecotourism with off grid glamping.

The farmland is managed as an organic stock rearing farm.

Details of the route can be found on the map below.

As you arrive at Bamff from the Hill of Alyth you will continue on one of the old drove roads that runs north to Glenisla for about half a mile.  This is part of one of the ancient tracks used by our ancestors, from time immemorial.  From the Middle Ages until the early 20th century it was a highway for cattle coming from the hills to the market in Alyth.

Turning left you pass a semi ruined former gamekeeper’s house on the right.  Below this and all along this short wooded track there are dams and pools created by beavers.  This track was planted with rhododendron as cover for pheasants in the 19th century, but in recent years Dundee Conservation Volunteers have cut and burnt them allowing native birch and other trees to regenerate.  The impact of beavers has also assisted this process.

On your left is the Bamff Hideaway, an off-grid cabin, a popular holiday let for wildlife watchers and nature lovers.

Bamff has many mature beech trees which were planted from the late eighteenth century as part of a landscape plan by Thomas White, a pupil of Capability Brown.

Turning right on to the drive you can see Bamff House ahead. The oldest part of the house is the tower on the south west side which was built in the 1590s, but may have thirteenth century origins dating back to the first Ramsay laird.  Additions and alterations date from the 18th to the 20th century. The family produced another King’s Doctor and a daughter of the house became the Duchess of Atholl, an MP and first female government minister in the UK parliament.

The Ramsay family still live here in part of the house. At the back there is a little shop/cafe run by an honesty box system which is available to Cateran Trail walkers.

American fir trees of various kinds, planted from around the middle of the 19th century have now grown tall, adding distinction to the surroundings of the house. Victorian plant hunters, notably David Douglas, returned from the Pacific coast of America with seeds of the huge trees they had discovered there. These “exotics” included the now ubiquitous Sitka spruce, which were left to grow tall  and are now fine mature specimens standing high above the surrounding forest.

You can find out more about the Cateran Trail here. 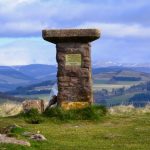 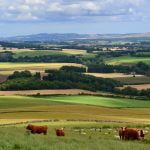