All points of interest
Have you seen:
Included in these itineraries:
Archaeology, History, Folk lore
walking, cycling, car

This burial mound could well be prehistoric in date but almost certainly represents the earliest phase of Pictish burial on this site, either as a new cairn or as a re-used prehistoric one.

It is regarded as being the tomb of King Arthur’s Queen, Guinevere, known locally as Vanora or Wanda.

It was not uncommon in the mid-first millennium for people of high status to be buried under round barrows like this one and documentary references going back to the early sixteenth century described the Mound as having been furnished with a number of Pictish stones. 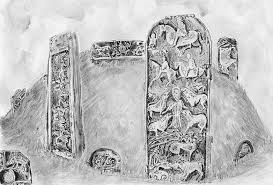 Included in these is the great ‘Vanora Stone’, which along with many of the others can still be seen in the Meigle Pictish Stone Museum, housed next door to the Churchyard in the Old School House.

The story of Vanora has been written about many times, first by Hector Boece in around 1527. The contemporary Scottish historian Stuart McHardy offers this version:

“The story ... has her as the queen of Arthur, a 6th century king of Strathclyde. This kingdom stretched from Dumbarton south as far as Carlisle. Although the whole of the British Isles was at this time under almost permanent threat of invasion Arthur decided to go on a pilgrimage to Rome. This was to show his loyalty to the Roman church in its struggle against the independent Celtic church of that time. Before leaving he appointed his nephew Modred to act as his regent and rule in his place. Disaster was bound to follow.

Though the Celtic peoples would unite in the face of a common enemy their first loyalty was to their tribe and Modred was a Pict. He was bound to make the most of the opportunity presented to him by his uncle. No sooner had Arthur left the country than Modred seized the throne and seduced his aunt, Vanora. Whether she was a willing victim or had plotted the whole thing with Modred is unclear but soon they were ruling as man and wife with Pictish troops to enforce their rule.

It was only a matter of time before Arthur found out what had happened and he immediately headed home to raise his followers and have his revenge upon the faithless pair. The battle where Arthur and Modred met is said to have been at Camlaan, near Carlisle, and it is the site of an actual 6th century battle. True to the old myths Arthur was victorious but in killing Modred he sustained a mortal wound himself. Soon he died and with him went any faint hope Vanora might have treasured for merciful treatment.

While Modred’s actions were understandable given the nature of the times Vanora had committed unforgivable sins. The Celtic peoples laid great stress on the ritual and spiritual importance of their rulers and Vanora had betrayed the most sacred trust. She was guilty of treason and adultery and her fate was a foregone conclusion — death.

The manner of her execution had to be decided and while the deliberations continued she was imprisoned at Barry Hill, near Alyth, just a few miles north of Meigle. Originally an Iron Age fort the site on Barry Hill was probably still in use in the 6th century and was as far from the Hollywood idea of an Arthurian castle as it is possible to be. At last Vanora was brought forth to hear her sentence and it must have surpassed even her wildest fears.

Her treachery to her husband, king and people was so bad that her death had to be as dishonourable as possible. She was to be torn to death by a pack of wild dogs. It is this grisly scene that is said to be portrayed on the stone.

After her gruesome death she was buried at Meigle with the strongest possible curses and anathema being heaped upon her grave in a manner reminiscent of Druidic ritual. More than twelve hundred years after her supposed burial these curses survive in the local belief that any young woman foolish enough to walk over Vanora’s Mound will become sterile. The curse is still remembered.”

It is now thought by archaeologists and historians that given the number of place name references to King Arthur in the immediate neighbourhood, (Arthurstone, Arthurbank) and the story of Vanora, Meigle could well have been an Arthurian cult centre in the later Medieval period, and the curse referred to in the Vanora story may have been introduced by proto-Reformation or Reformation Church authorities in an attempt to stamp out  fertility rituals that were popular folk practices linked to Arthurian legends across Europe.

Hall, Mark A., The Meigle Stones, A Biographical Overview 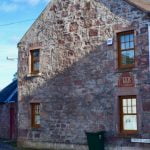 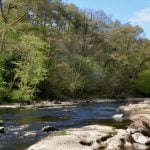