All points of interest
Have you seen:
Included in these itineraries:
Architecture, Historic Building
cycling, car

Home of a 19thc slave owner and Dundee politician.

This five-bay two-storey house, commanding panoramic views to north and south, was designed and built by the radical politician George Kinloch of Kinloch for himself in 1798.

The basement contained the kitchens and servants rooms and the first floor house bedrooms and a small parlour or library over the entrance hall. In the later 18th century a wing was added to the east end of the house and in 1864 John Carver of Meigle provided plans for the creation of a new north wing and a new three- storey tower entrance. The gatepiers appear to date from the Victorian remodelling but the magnificent eagles may be Georgian and brought in from elsewhere.

The nearby Romanesque style Mausoleum was built in 1861 is the burial ground of the Kinloch family, including George Kinloch himself. It was built on the same site and a 9thc chapel dedicated to the Virgin Mary.

George Kinloch was a slave-owner in Jamaica, where he inherited the Grange estate on coming of age in 1796.

He also inherited Kinloch estate, which reportedly his uncle John Kinloch  had repurchased from slave-derived wealth before his death in 1770.

Known as the ‘Radical Laird’, in 1819 he was outlawed after failing to appear on sedition charges in connection with mass meetings in Manchester to protest the Peterloo Massacre.

Bailed to stand trial in Edinburgh, he learned that the authorities intended to make an example of him by passing a sentence of transportation for life to Australia. He bought a large wig and, assuming the name of Smith, fled via Newcastle, London and Dover to Paris, where he arrived on Christmas Eve.

Thanks to the King’s intervention however, he was allowed to return in 1822.

Kinloch set about restoring his estate and took no active part in politics for some years. However, with the coming of Reform in 1832, views which had once been dangerously radical became mainstream and he was feted as a hero of the movement.

He stood for the new Dundee constituency in the first election after the passage of the Act and was duly returned as the city's first MP. In his own words: "On the 24th December 1819 I was proclaimed at the Cross of Edinburgh a rebel and an outlaw … On the same day of December 1832 I was, by the same Sheriff L'Amy, proclaimed the chosen representative of the people of Dundee."

He did not represent Dundee for long dying two months later in London from a chill.

A statue of him was raised in 1872 in Albert Square, Dundee, it was "the first statue ever erected in the streets of Dundee" and commemorates him as having been "Outlawed for the Advocacy of Popular Rights". An article in the Dundee Courier on the inauguration of the monument reproduces an address George Kinloch published in June 1831 in which he stated, "I am an enemy to slavery in all its forms - to negro slavery in particular, and would vote for its gradual abolition, as early as it can be accomplished with benefit to the uninstructed negroes themselves, and with safety to the whites."

While this comment may appear to be at odds with his earlier position as a slave-owner, it should be noted that slave-owners - particularly politicians campaigning for office - often expressed general anti-slavery views while qualifying their statements by describing enslaved people as not ready or educated enough yet for Emancipation and warning that changes could be dangerous for white people in the colonies.

Neither Kinloch Mausoleum nor Kinloch House are not open to the public and can only be seen from the main Coupar Angus A94 Road. The mausoleum is on the left hand side of the road travelling west and the house on the right hand side. 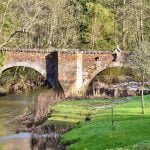 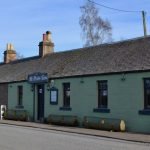