Dedicated in 1899, St Michael and All Angels’ Episcopal Church is a simple but picturesque building designed by the Rev William Sugden. On the roof sits an iron clad flèche containing a fine bell, the maker unidentified. There is a gabled hood over the entrance and in the nave, cusped lights in the rectangular window openings, and a wooden panelled interior.

In 1897 The Bishop of St Andrews, the Rt. Rev. George Howard Wilkinson convened a meeting at Merklands to consider the possibility of erecting a church in the area for shooting tenants and their friends and family who visited each year during the summer months.  It was the last church to be designed by the Rev William Sugden, who from 1887 had been the incumbent of St Anne’s Coupar Angus.

The foundation stone was laid on the 29th September 1898 on ground gifted by the Macdonalds of Ballintuim House. William Kid Macdonald was the town clerk in Arbroath and a partner in the legal firm of J & W Macdonald and at Ballintuim lived with five Misses Macdonalds. The decision to build had been taken at a meeting convened by Wilkinson at Merklands owned by the MacKenzie Partingtons who were to give additional support and the stone was taken from three derelict crofts, Salamanca, Waterloo and Inkerman at Balmyle owned and occupied by George Constable. It was at Merklands that Farquhar was to see in the 20th century writing, ‘I was at Merklands, Ballintuim, on Dec. 31st and there watched the last daylight of the 1800s die out of the leaden coloured sky, which hung over the imagination is more affected by passing from the 1800s to 1900 then from 1900 to 1901. I thank God for preserving me in health, strength and happiness so far on my life‘s journeys!’. The following day he wrote, ‘I think I ought to chronicle how I spent the first day of the 1900s. I took the duty at S. Michael‘s, Ballintuim, for the first time yesterday and was delighted to have 40 present, (of whom 9 communicated) at the forenoon Service in so lone a place'.

The church was dedicated by Bishop Wilkinson of St. Andrews on 13thAugust 1899. The sole local Trustee from 1899 until his death was Mr, Charles MacKenzie Partinton of Merklands, who undertook with his wife (later Lady Owen), the whole management of the Church's affairs.  Thereafter the Bishop of the Diocese appointed two local trustees to assist him in caring for St. Michaels.  In 1943 the first Congregational meeting was held, and gradually the running of the Church was taken over by a Church Committee, with the two local trustees retained, the committee appointing its own Chairman.

Source: Lye, M. (2011) A Guide to Episcopal Churches in the Diocese of St. Andrews, Dunkeld & Dunblane

You can enjoy a 5 mile audio walk along the Cateran Trail from Ballintuim to Kirkmichael, listening to autobiographical interviews of people baptised there – details here.

The feast of St Michael and All Angels’ is celebrated on 29thSeptember, the date the foundation stone was laid. 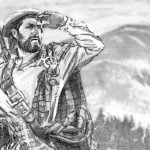 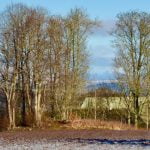