All points of interest
Have you seen:
Included in these itineraries:
Archaeology, Folk lore
walking, cycling, car

This Bronze Age Cairn and Cist is the second site in Meigle to have a story that connects it with the Scottish King, Macbeth (see Macbeth’s Stone entry, which is nearby).

Although recorded history tells us that Macbeth was slain at the Battle of Lumphanan in Aberdeenshire, the version of the story linked to Belliduff claims otherwise.

One account of it was written in 1885 by the Rev J.G. Macpherson:

“In the enclosures of the castle there is a tumulus called Belliduff, which tradition gives as the spot where, in 1056, Macbeth was killed in battle by Macduff. Taking the most reliable facts out of the mass of fiction, we see that Macbeth, after murdering King Duncan, was crowned King; but this soon roused up the revengeful ire of Malcolm, Duncan’s son, who was heartily assisted by the English King, Edward the Confessor. The English forces marched as far north as Dunsinane, one of the Sidlaws, where they had a furious hand-to-hand conflict with Macbeth, who commanded his troops in person. After many displays of courage Macbeth was obliged to retreat; and tradition fixes Belliduff as a likely place where Macduff, Thane of Fife, to gratify personal revenge, slew the King in single combat”

“There are several tumuli in the neighbourhood of the churchyard of Meigle', particularly that of Belliduff, within the policies of Belmont. Local tradition asserts that Macbeth was there slain and buried and two granite blocks in different parts of the enclosures, one of which stands on end, and is calculated to be at least 20 tons weight, are said, by the same authority, to be connected with the wars of Macbeth and Macduff. It would be needless to inquire into the truth of these stories; they had no doubt originated from the name of the tumuli, Belliduff, which Mr Chambers suggested might rather be a corruption of Belidubh, or " the black town."

There is no doubt, however, but that tumulus was a place of sepulture; for, at the same time, as the investigations above alluded to were made at the monuments in Meigle churchyard, Dr Wise had that mound searched, and in the centre, about 2 feet below the surface, an ancient stone coffin was discovered. This coffin lay north-west by south-west, was about 3 feet 3 inches long, 2 feet broad, 15 inches deep, and composed of rude stone slabs, with the bare soil for a bottom: No bones were found in it; but,- from a deposit of variously- sized stones which were got in the trench made by the workmen, I am inclined to suppose that the grave, as in many cases that have come under my observation, is also surrounded by a mass of stones and earth.”

Sources:
The Rev J.G. Macpherson writing in 1885 Strathmore past and present

Heading south from Meigle on the B954, you can see a fine stone wall (the boundary of the Belmont Estate) on the west side of the road just after the houses come to an end. Stop at the first gap in the wall. Walk through the gap and the cairn is a very short walk on the other side.

A Cairn is a monument featuring a bank or mound constructed primarily of stone.

A Cist is a rectangular structure normally used for burial purposes; formed from stone slabs set on edge and covered by one or more horizontal slabs or capstones. Cists may be built on the surface or sunk into the ground. 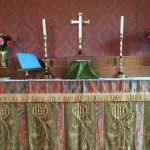 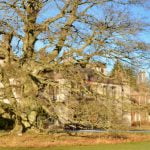