All points of interest
Have you seen:
Included in these itineraries:
Historic Building
walking

Ashbank Mill was built in about  1836  by a  Mr. John  Baxter. Originally it was used for spinning  flax and  tow (a coarse broken fibre removed during processing flax. The very light colour of flax tow is the source of the word “towhead” meaning a person with naturally tousled light blonde hair). The flax  used was imported  into Dundee  from the  Baltic ports,  and  after being  spun  at Ashbank was  either re-conveyed  to  Dundee for  sale  there or  was  disposed of  to  manufacturers in  the  neighbourhood,  and in  Alyth  and Coupar  Angus.

As innovation in Jute spinning developed, sackcloth, bagging, and other coarse fabrics which had been made from hemp, flax and coarse tows, began to be made entirely from jute and the linen trade declined except for finer cloths.

At Ashbank Mill, this shift of focus occurred in the late 1870s when new machinery was installed and jute alone  was  spun.

At  this  time about  5,000  spindles per week  of  cops (conical  balls of  thread)  and wefts  were  produced principally  for  the Dundee  trade.   The employees numbered around 100.

The Lornty Spinning Company  under  Mr.  A. D. Grimond  in  the first  two  years of  the  century carried  out  modernisation of  their  mills, and  as  Ashbank now  belonged  to them  it  came into  the  scheme, and  machinery  was  installed  in the  new  building in  1901.   It seems  to  have been  working  in September  1903  when a  breakdown  occurred involving  extensive  repairs in  the  main driving  arrangements  and the  opportunity  was taken  for  the alteration  of  the gearing  to  let the  water  wheel run  at  a more  advantageous  speed.  A  reference  in the  Blairgowrie  Advertiser of  May  6, 1905  seems  to indicate  that  Ashbank at  that  time was  idle.   This must  have  been only  a  temporary stoppage  following  the disbanding  of  the Lornty  Spinning  Company, as  the  mill had  been  in full  operation  for a  number  of years  previous  to its  being  destroyed by  fire  in about 1918.

Ashbank  was  supplied by  water  from a  weir  (or croy)  which  had, prior  to  1903, been  shared  with Bramblebank  Mill  across the  river.   After the fire and destruction   of  Ashbank this  was  swept away  by  floods and  its  absence, in  recent  years, necessitated  the  use of  the  Westfield weir  and buildings  for the  generation  of power  for  the reconstructed  and  refitted Bramblebank Works.

Ashbank Mill was built perpendicular to the river and tenement accommodation was built nearby for the workers.

‘A fine, mansion with garden and some ornamental ground attached was the property of John Baxter Esq who was the proprietor of a large flax mill of the same name situated a little north of the mansion.’

John Baxter’s wife was very well known in the district as a welcoming hostess for many entertainments in the house and garden.  She was notable for ‘an irresistible, bright, sunshiny manner, a nimble and perfectly spontaneous wit, and a gift of mimicry that could keep everyone in fits of laughter as long as she chose’. (quoted in Henry Dryerre ‘Blairgowrie and Strathmore Worthies’ p36). Dryerre is fulsome in his praise of her virtues and accomplishments: ‘It was characteristic of the young lady to jump the Keith on the Ericht (Donald Cargill’s Leap) on one occasion – the only instance, it is believed, of A LADY ACCOMPLISHING THE FEAT’.

The mansion was demolished and all that remains of the property is the lodge gatehouse at the main entrance and a few fine specimens of the trees that once graced the fine gardens.

Very little remains of the mill and tenements with just a few stones and foundations scattered among the undergrowth.

As many of the mills along the Ericht were built into the river bank they were named after local features and incorporated ‘bank’ into their names (Oakbank, Ashbank, Bramblebank, Keathbank). 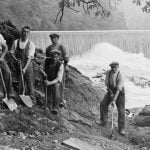 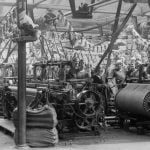 A Spin Along the Ericht
X