In the 18thcentury Alyth became heavily involved in flax processing for the linen textile industry, and spinning and especially hand-loom weaving dominated local employment. Increasing quantities of factory-spun yarn was brought in to the town for manufacture into mainly coarser linen fabrics. In the mid-1800s road and railway improvement connecting Alyth and Dundee boosted the linen industry and led to new coal-powered steam mills in the town producing linen and later jute textiles. The main factory, David Smith & Sons, was the mainstay of Alyth’s economy until its demise in the early 1900s.

Linen and woollen textiles have been produced in the Alyth area for many centuries, initially mainly for local consumption. From the early 1700s Scottish linen production greatly expanded, stimulated by government support and increased sales to England, the colonies of North America and elsewhere. From mid-century it was Scotland’s premier industry, and by 1793 a large amount of good quality flax (or lint) for linen manufacture was being grown around Alyth. There were three water-powered lint mills in the parish where the strong flax fibres were processed ready for spinning and later weaving into linen cloth.

At this time the spinning of flax and weaving of mainly coarse brown linen was done by hand in houses and workshops in and around Alyth. In 1776 some 310,119 yards of brown, white and Osnaburg (coarse plain) linen were being woven on local hand looms, some of it exported to the East Indies. By 1843 this had increased to more than 1,575,000 yards, employing 404 weavers and many older people and children engaged in winding spun yarn, now increasingly brought from Dundee and Fife. They were generally organised by several ‘master manufacturers’ who sold the finished goods to merchants in Dundee.

In the 1840s two waulk mills were in operation for processing the yarn ready for weaving. One was located at Mill Street, Alyth, originally built in the 1790s by Gilbert Sandy and possibly involved in the spinning of flax, since James Sandy (his brother and celebrated Alyth inventor) made several improvements to lint-spinning machinery in addition to financing the mill’s construction. By 1883, however, it described as a ‘wool mill’ operated by Illingworth & Company, and a similar change of use occurred at the Inverqueich lint mill.

Production costs were lower in Alyth than in the cities, weavers earning only 2/6d to 3/- per week and spinners 1s 2d, supplemented by labouring work on local farms or tending their own small crofts. The depression in the linen trade in the early 19thcentury produced further widespread hardship, but linen production increased with improvements to the road network across to Dundee and especially with the opening of the Dundee-Newtyle Railway in 1831. It reduced transport costs and brought in supplies of cheaper coal which encouraged the family of David Smith to open a new steam-powered linen mill in Alyth in 1854, one of the first in Strathmore. The extension of a railway line to the town in 1861 was heavily promoted by the town’s manufacturers, and in 1864 Alexander Warden wrote that David Smith & Sons, ‘extensive handloom manufacturers, are erecting a power-loom weaving establishment, which will be driven by a steam engine of 12 horsepower, and is intended to contain 100 looms’.

Although local hand-spinning declined, the mills provided more constant employment for the growing workforce in the production of ‘chiefly hessians, brown sheetings, and other coarse fabrics’ using mill-spun yarn, and in 1873 Smith built a new spinning mill for this purpose. By the early 1880s FH Groome recorded two Alyth mills in operation, ‘one of which, Smith & Sons…, to flax adds jute spinning, with bleaching, dyeing, and calendering’, which involved installing new machinery for the smoothing and finishing of linen cloth. They expanded further when they bought the premises and business of their rival Alyth firm, Adam & Bruce.

The Smith family were at the root of Alyth’s prosperity in the late 19thcentury, which was suddenly badly affected by the major fire which totally destroyed the spinning mill in 1898. Most workers were transferred to the Smiths’ leased (later purchased) Garden Mill in Dundee but many shops and merchants in Alyth permanently lost business, and in 1909 the firm was declared bankrupt. David Smith snr died in 1916. Today, all that is left are the remains with the main site now used by Classic Restorations (Scotland) Ltd who specialise in the restoration of vintage vehicles. 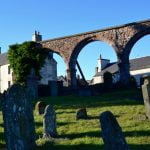 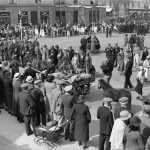