Situated in a prominent position overlooking the town, Alyth Parish Church was completed in 1839 to a design by Thomas Hamilton, an Edinburgh architect who designed many of that city’s prominent buildings, including the monument to Robert Burns on Calton Hill. Essentially Romanesque in style, it has an unusually high spire.

In the porch of the Church stands a 7th-century Pictish stone. It was found in 1887 when levelling ground in front of the door of the Established Church manse which at at time was near the ruins of the old Kirk at the top of Toutie Street.

To the right of the Sanctuary, the lectern stands as a memorial to those killed in the Second World War. The design from the Pictish stone has been carved into the front panel, and may also be identified on the chairs immediately behind the Communion table. The high pulpit and sounding board, both of yellow pine, used to be situated on the opposite wall, until a major refurbishment in 1975 turned the interior around, and allowed much-needed halls to be created beyond the new wall behind the pulpit.

The funeral escutcheon on the balcony to the right of the organ pipes commemorates the death of Sir George Ramsay, sixth baronet of Bamff, in a duel at Musselburgh in April 1790, one of the last duelling deaths in Scotland.

The three-manual pipe organ was originally built by Harrison and Harrison in 1890 for Dysart Parish Church in Fife and was extensively refurbished in 2005 by Forth Pipe Organs Ltd. It was installed in Alyth Parish Church in 1978 after a serious fire destroyed the previous organ, and part of the roof, in February 1977.

An axe presented by the Fire Brigade at that time may be seen in the Hall of Friendship, along with various other pictures and portraits.

The memorial stained glass windows all date from the early 20th century. Upstairs, in the North Gallery, the window depicting the life of Christ commemorates the Reverend Colin Symers (minister 1773-1817). Designed by Stephen Adam of Glasgow, it was unveiled by the Countess of Airlie in 1905. Downstairs on the left hand side, the McGibbon window by Ballantyne of Edinburgh also dates from 1905. In the centre, the Robertson window was completed by Stephen Adam in 1906. On the right, the Ramsay window incorporates local scenes. Up in the opposite South Gallery, the Duncan of Jordanstone Memorial Window is considered the best example of stained glass in the church. Designed by Henry Holiday of London, it was dedicated in 1908, and takes as its theme The Man of Sorrows. Downstairs, from left to right, are the Alexander Mitchell and Barbara Duncan Memorial Window, the Charles Simpson Memorial Window of 1913, also designed by Henry Holiday of London, and a window commemorating the Revd James Meikle (minister 1897-1933). Designed by Miss Kemp of Edinburgh in 1948, it depicts the Parable of the Sower, and features the local raspberry crops.

The Class II Pictish symbol stone in the porch was found in 1887 when levelling ground in front of the door of the Established Church manse. This slab is carved on both broad faces in a mixture of incision and false relief. On one face there is an outline cross with a slender basal tenon, defined by a sunken groove. The centre of the cross-head is marked by a hollow, and the arms and shaft are filled with incised interlace of simple design, linked around the central hollow. In the four spaces between the arms and shaft there are large incised spirals, those on the left being damaged, as is the terminal of the left arm. The other face of the stone bears part of a double-disc and Z-rod with hatched internal decoration. The surviving upper left rod ends in a leaf-shape but bears no foliation.

You can check opening times here 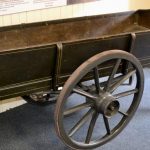 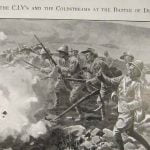