Exploring the geology of the Highland Boundary Fault.

You can enjoy three geology walks around Alyth, two on the Hill of Alyth and one in the Den ‘o’ Alyth.

A short introduction to the geology area is below and details of each, including how long the walks are can be found in the points of interest section in the Alyth Geology Itinerary which you can access here.

Alyth lies near the Highland Boundary Fault, the line separating ancient metamorphic rocks of the Highlands from sedimentary rocks of the Midland Valley. The Hill of Alyth has outcrops of the Old Red Sandstone and provides views along the Highland Boundary and across the broad valley of Strathmore. In this area Sir Charles Lyell, one of the great 19thcentury pioneers of geology, drew one of the first ever geological cross sections. There is also evidence of the flow of the last ice sheet to cover Scotland.

The Highland Boundary Fault runs across Scotland from Helensburgh northeast along the northern edge of Strathmore to Stonehaven. The fault was active during a plate tectonic collision which took place from the mid Ordovician to mid Devonian (520 to 400 million years ago). The fault allowed the Midland Valley to form a deep rift, filled with thousands of metres of sediment eroded from surrounding mountains. The plate collision also resulted in volcanic activity.

The Highland Boundary has a long history of vertical and sideways movement; rather than a single fault it is generally a series of three or more close together. In places the Devonian sedimentary and volcanic rocks overlap northwards on to the Highland rocks, and this is the case in the Blairgowrie – Alyth area.

One fault runs along the Den of Welton. On its south side are thick sandstones and conglomerates known as the Old Red Sandstone; these form the Hill of Alyth and extend south across Strathmore. On its north side are thinner conglomerates with basaltic lavas, which overlie oceanic rocks of the Highland Border Series (rarely exposed at the surface). Farther north, schists and quartzites of the Dalradian series from the hills of Drumderg, Cairn Gibbs, etc.

The Old Red Sandstone
The ORS comprises a sequence of continental sediments deposited by streams, rivers and lakes throughout the Devonian Period when Scotland, much of northern Europe, Greenland and North America formed a large continent called Laurussia, located between 0oand 30osouth of the equator. During the Early Devonian (400 million years ago) the Alyth area was situated in the subtropics around 28oS. The climate was semi-arid, with little land vegetation at this time.

The river systems were large and may have come from the mountains of Norway or Greenland. They were braided rivers with several channels separated by bars of sand or gravel. 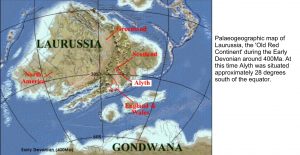 Below is a an example of a braided river in Death Valley, California. 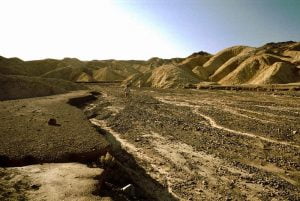 Below is a map of the area’s Old Red Sandstone palaeogeography. 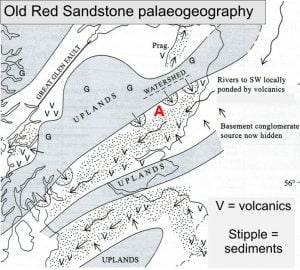 The Ice Age
Scotland has been repeatedly covered by ice during the last 1.8 million years, eroding rocks from the high ground and transporting and depositing sediment in the valleys. Strathmore was a major pathway for ice flowing east into the North Sea (red arrow on map below). 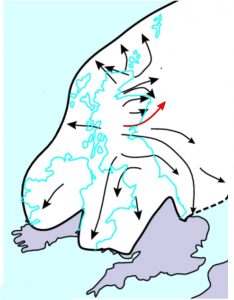 A shaded-relief map of the Alyth area reveals streamlining by ice flowing from west to east. The course of the Alyth Burn (left side of image below) was deepened by glacial meltwater. Erratic blocks of schist and granite from the Highlands occur over the summit of the hill, which you can see in the centre. 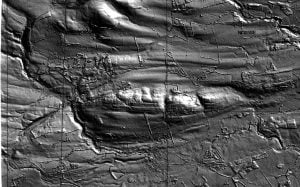 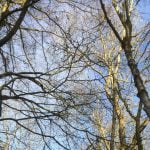 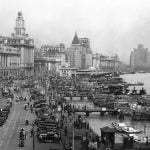