All points of interest
Have you seen:
Included in these itineraries:
Birds, Nature Trail
walking, cycling, car

A ‘kettle’ hole created in the last ice age.

Monk Myre is of glacial origin, formed of a type of geographic formation known as a ‘kettle’ that has partially silted up.

The loch is of national importance as it provides a complete dating record for vegetation changes over the last 13,000 years.

A ‘kettle’ is a depression/hole formed by retreating glaciers. The kettles are formed as a result of blocks of dead ice left behind by retreating glaciers, which become surrounded by sediment  deposited by meltwater  streams as there is increased friction. The ice becomes buried in the sediment and when the ice melts, a depression is left called a kettle hole, creating a dimpled appearance on the outwash plain. Lakes or lochs  often fill these kettles.

The population of greylag geese wintering in the Tay-Isla Valley has been one of the largest in the UK, and Monk Myre forms part of a group of sites that provide this species with a safe day and night time roost.

Other species of wetland birds that make use of the site include great crested grebe, shoveler, mallard, teal, wigeon, pochard, tufted duck and goldeneye.

Originally a shallow reedy pool, covering a bed of rich marl, it was deepened into a lake by extensive digging for removal of the marl.

Accessing Monk Myre is easiest through the gate opposite East Myreriggs Farm. 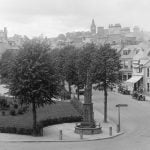 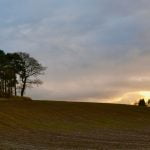