All points of interest
Have you seen:
Included in these itineraries:
Folk lore, Hills n Glens, Hillwalking
walking, cycling

One of the Ecomuseum’s most prominent landmarks with superb summit views.

Mount Blair’ sweeping, symmetrical cone, 744 metres high, is located between Glenshee and Glen Isla. On a clear day you have a 360 degree view encompassing Montrose in the east, Ben Lawers in the west, the Lomonds to the south and the Cairngorms to the north.

One if the many legends associated with it is that it has a well, the waters of which have magical healing properties.

There is a long tradition of healing wells in Scotland with around 600 water sources once deemed to have special curative powers. With some dating to the times of druids, the wells were later attached to various saints and particular ailments.

People would visit different wells for different illnesses, from insanity to eye disease and infertility, with offerings made to the healing spirit to insure good health. The first Sundays of November, February, May and August were believed to be when the powers of the wells were at their most potent.

There is also a true and sad tale associated with Mount Blair. Beneath the cairn on the summit is a suicide’s grave. The unfortunate individual was Alexander Robertson, otherwise known as Alasdair Luath, or Swift Alexander, who hanged himself on a beam which he placed across a nearby lime kiln. At that time suicides were denied interment in consecrated ground; the usual place of burial for such being where ‘three lairds’ lands met’. The top of Mount Blair may have been the nearest place to comply with the necessary requirements.

It being considered that the story might have been mythical, a number of Glenisla men in the first half of the 19thc resolved to set the matter to rest. Excavation at the cairn revealed undoubted human remains, and an intact thighbone went to prove that the person to whom it once belonged must have been of very large proportions.

Listen to ‘The Story of Colly Camb’, one of the most famous folk tales about Mount Blair, told for us by professional storyteller Lindsey Gibb.

And our poet in residence Jim Mackintosh, wrote a poem about Mount Blair too called ‘The Old Mountain Sleeper’ 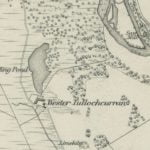 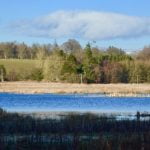