The site of a number of iron age round houses.

Dalrulzion is a name given to a particular form of iron age house building style with double walls. They are so named because there are many examples of this type of ancient building within the forest. These hut circles have been excavated in the past and are although well documented not much is known about them or about the lives of the people who lived in them.

Dalrulzion is a name given to a particular form of iron age house building style found almost exclusively in Perthshire. They are so named because there are many examples of this type of ancient building within the forest

Round houses emerged in Scotland around 4,000 years ago and continued as the primary type of domestic dwelling throughout the Bronze and Iron Age until around 600 AD. Cateran Country has one of the densest concentrations of surviving prehistoric settlement remains of this kind known in Scotland. Their walls could be made of stone or turf supporting a conical thatched roof. At some sites, including those at Dalrulzion, you can still see the outline of enclosures for keeping livestock.

A moderate walk up the forest track takes you to Loch Mharaich, believed to be the haunt of a mermaid who terrorised the local inhabitants until she was killed by Bran, one of Fionn mac Cumhaill’s dogs, where you can enjoy a tranquil picnic before your return walk.

You may encounter some Llama trekking from the nearby Glenshee Ecocamp on your journey!

The name Dalrulzion is derived from "water meadow". 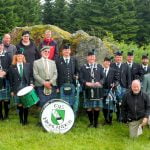 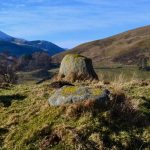