One of the most biodiverse sites in the Ecomuseum

Little Glas Maol and Monega Hill are within the Caenlochan Special Area of Conservation and its floristic richness is of European importance.

It has some of the best examples in the UK of fourteen European habitats, including montane willow scrub and is renowned as one of the most important upland sites in Britain for alpine plants, including lichens and bryophytes.

It is thought to have almost three hundred higher plant species, of which almost one third are described as arctic-alpines.

A combination of high altitude, relatively continental climate and differing rock and soil types has led to the development of Caenlochan’s wide range of plant communities, several of which are the most extensive and representative of their type in Britain.

But whilst the area is celebrated for its biodiversity now, it was even greater in past times.

Between 9,000 and 2,750 BP, Birch-hazel woodlands grew in the glens, forming a tree-line at perhaps 600 to 700m altitude and at various times pine trees grew on the drier, more acid soils and alder grew on the flood plains and other water-logged soils.

Scattered trees of oak, elm, ash and aspen grew in these woods, and Bird Cherry occurred occasionally. Parts of these woodlands may have had an understorey of juniper.

Within the woodland zone and above it were scattered mires and bogs and areas of grassland. Tall-herbs probably grew in the woods, in the rich grasslands and on the ledges to which they are restricted today.

Dwarf-herbs probably grew in the rich grasslands at high altitudes, and on the cliffs.

For a long period the hill glens were very little affected by man's activities. Some light grazing occurred, especially above the tree-line, and the regeneration of the woodlands may have been impaired.

Tall-herbs and other grazing-sensitive taxa began to be restricted to the steeper slopes and less accessible areas but overall there was little change, with the vegetational as well as the floristic diversity maintained.

During the last two centuries, however, human influence has been strongly felt in the area. Excessive numbers of sheep have grazed the landscape, and in the last century, large herds of red deer have been encouraged to develop.

This has led to the restriction of the grazing-sensitive taxa to the relatively inaccessible situations where, to judge from a comparison between the pollen diagrams from Coire Fee and Caenlochan Glen, they have always been much more luxuriant than in the woods and grasslands where some grazing by native herbivores must always have occurred.

The last century has seen the disappearance of the woodlands in these glens, though the reasons perhaps differ. Caenlochan Glen was planted with Larch about 120 to 150 years ago in order to encourage red deer, and these trees were felled 50 to 60 years ago. The birch and hazel woodlands may have been cleared before the planting, or at the time of the felling, or may simply have declined due to lack of regeneration either as a result of excessive deer-grazing or because of shading by the larch trees. 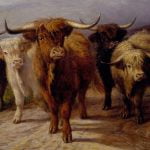 Droving across the Monega Pass 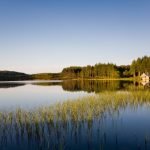