This small Four Poster stone circle, so called because of the prominent upright stones that feature in each corner of a rectangle, is beautifully set on the north-eastern shoulder of a low hill on the Mains of Creuchies Farm near Alyth. You can listen to Helen Simpson, whose family own the farm, talk about this very special place that they call home in the video below.

Four Poster stone circles usually consist of just four uprights, laid on the plan of a circle, sometimes with a fifth recumbent stone.

The English Heritage Monument Class definition describes them as:

“a rectangular or sub-rectangular setting of four or five stones which are, or were once, upright. The corner stones of the rectangle are usually placed on the perimeter of a good circle, aligned on the cardinal points and are graded in height. The rectangle varies considerably in size from 13m squared to 345m squared. They vary considerably in size, the area enclosed by the rectangle varying from 13m squared to 345m squared. Some appear to have been laid out as a rectangle, others as a circle and some as both. It is the circumferential siting of the stones of four-posters that justifies the otherwise paradoxical use of “circle” for what appears to be a square or rectangle.”

The majority of this type can be found in Scotland where 54 monuments, or traces of monuments have been identified, which are or might have been four-poster stone circles. Those that have been dated were constructed in the Bronze Age (2,100 – 750 BC).

When you visit the site, you will see that one of the stones has fallen, the other three still standing and measuring between three and five feet tall. Other smaller stones would have completed such a monument circuit but these do not usually survive. The recumbent stone and the tall one opposite are granite from Ben Vuirich. One of the others is schist and the fourth is garnet-bearing schist.

In a nearby wood are a collection of larger stones that were thought to be the remains of another circle but are now considered to be simply field clearance.

Stone circles began to appear in the late Neolithic (c 3,000 – c 2,500 BC) and continue to be constructed and re-modelled well into the Bronze Age. Whatever their form, stone circles appear to have had a ceremonial function and many are aligned to relate to events in the yearly movement of the sun and the moon across the horizon. 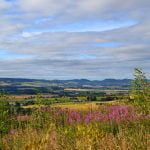 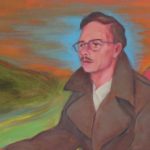